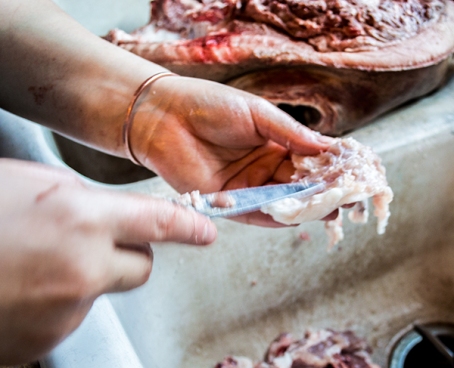 Glands and scraps for Clover doggins

Cooked and stripped of meat

We, me and mom, started out when a friend of ours had a pig head for sale. We bought it because ever since I had told mom about headcheese, I had wanted to make it and mom had heard that it was good. And so dad picked up Henry, the pig head, and brought him home where he stayed over night in a cooler with ice.

I took it upon myself to do all the gland removal and butchering process, I like doing that kind of stuff for some reason!

I washed him off while mom watched and gave me instructions. Then I cut off his ears and snout with the kitchen shears. Apparently you can fry and eat them!

Then I turned Henry over and started to cut off all the glands that look like bubble wrap or something similar with a sharp knife combined with the kitchen shears. I took out all the glands from the inside of the cheeks so that the inside was completely hollow. I had a big pile of strips of glands next to me when I was done. I gave them to our dog. The funny thing was she did not eat them at first. She sniffed them and then waited for a bit to see what the stuff in her bowl would do. She ate it in the end though. Then I came back to the sink and washed Henry off.

I turned Henry over and started to cut out his tongue. It would not come out the mouth because his jaw was locked in place. So instead I cut it out from behind, on the severed part of the head. I had to dig the knife deep into his throat and pull and pull to get the tongue out. But it came out and I put it with the ears and snout. Then I washed Henry off again so that he would be clean when we put him in the pot. Mom stood and watched most of the time.

Then I tried to take off his hair with a razor blade. It refused to come off so I used the scissors and knife to scrape and cut it off from around his jaw and bone of a snout and from around his eyes and his floppy, fat cheeksjowls.

When I was done with that, I cut out his ear bones. Then I washed him off again. Then I tried to get to his brains but I could not get through his skull. So we decided that it would be okay to roast him with his brains and eyeballs in since they were encased in skull 🙂 I put him in a roasting pan with seasonings [carrots, onions, celery, garlic and spices] mom had prepared. Then Henry went into the oven for just about an hour.

Mom took him out and we tried to put Henry into the pot so we could simmer him. He was to fatty to go in so mom cut off some of his fat and then I popped him in. He fit nicely.

We filled the pot with the pan juices and all of the vegetables and spices and 3 gallons of water. I moved the pot to the stove and we cooked him on high until the water boiled. Then we reduced it to a simmer and let him cook for 3-4 hours. When he is done, the meat should peel away from the bone.

We took Henry from the pot 4 hours later. During the time he was cooking, I baked cookies.

The meat came right off the bone. Mom cut off most of it. I finished the rest of it. Then I separated the fat from the meat. Henry had more fat on him then meat! That really surprised me! I shredded the meat into tiny, tiny pieces and put it in a mixing bowl and mom added salt, cinnamon, fennel, chili flakes and pepper. I mixed it up.

All that remained of Henry was a skeleton of the head in two sections: The lower jaw and the top part.

The brains had cooked into the meat but that is all right: They are completely edible and not in the least bit harmless unless you are allergic 🙂

And that is the story of the first making of headcheese by our family from my view.

Written and edited by;

One thought on “Head Cheese”