It was three weeks ago when I went out to feed our hens. We currently have 12 hens and 3 roosters. I emerged from the coop and heard a most suspicious peeping sound. Looking to investigate, I entered the run and, there in the highest nesting box, was a hen with three chicks!

I got them some food and water and put it up on the flat, wooded perches outside the nesting box and stood back to watch. This is a funny time for hatching chicks, but it has not been that cold lately. As I watched, one of the chicks hopped out of the nest and fell right through the slats of the wood! It peeped feebly on the ground and I moved forward to pick it up. Just as I reached it, the mother hen clucked angrily from above. She jumped out of the nest and landed furiously on my head! She pecked and clawed until U shook her off and backed away from her. The mother hen then picked up her chick using her beak and claws and flew back up into the nest with it.

There are two brown ones and one black one. The next morning when I went out to feed the chickens, the mother hen had transported all her chicks to the ground (I personally think she just pushes them out of the nest. They can obviously survive the drop). I blocked off the hole leading from the coop into the run and shut the run door so she could not get out. Our dog would eat the chicks if she saw them.

I feed her in the run now, and she stays in there. The chicks have lost most of their fuzz and have wing and tail feathers. They can fly and hop short distances and, at this time of year I feed the hens cracked corn; the chicks could eat it right from the day they hatched. We still have all three and they still peep. When they sound like hens and they are bigger, then I will let them out of the run and we all hope they are hens, not roosters!

With three roosters, a fight is guaranteed soon and two someones are going to end up in the stew pot.

Wishing you a Merry Christmas and Happy New Year! 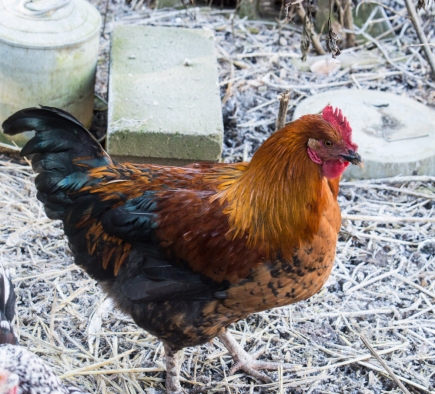