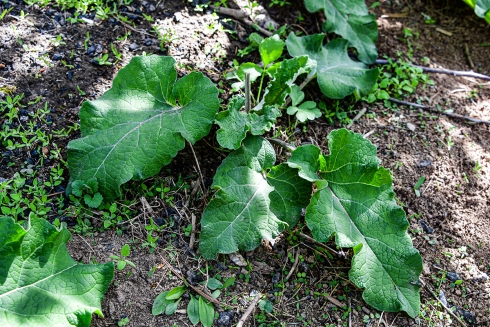 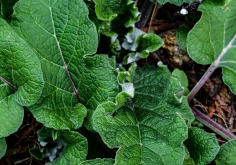 Burdock grows easily where I live.  Under stands of tulip poplar where woods meet grass, burdock’s right there at the edges of the hedge row.  There are clumps in corners outside our house, by doorways, near the chicken coop, under apple trees, we get caught up in burs and our dog gets clumps in her furs.  My children used to toss the burs at one another then come inside for detangling, ouch!

My family enjoys burdock leaves as one of the very first spring plants, edible ones, that emerge as we emerge like bears from the barren winter and there’s burdock.  We sauté the small leaves, sometimes in combination with dandelion leaves, garlic mustard, and daylily shoots or with garlic and add a splash of tamari or balsamic vinaigrette . . .  a little goes quite far as burdock leaves are far more bitter than the roots.

I’ve tried digging up burdock roots, and I must say in the soil where we live they’re extremely difficult to get out . . . the plants are crowded and the roots spindly.  We mainly eat the leaves and infuse them in oil for salves, and I purchase already dried roots from Mountain Rose Herbs to tincture or prepare as cold infusion, though primarily my relationship with burdock is one where it is a toning and nutritive food.  After I had a miscarriage, I turned to burdock as one plant ally to assist in rebuilding the blood I had lost by way of regularly eating the young greens until they grew too big, and that was good food medicine.

Native to Eurasia and related to thistle, burdock is happy to blow its whistle pretty much worldwide at the time of this writing.  Happy to grow in waste areas, disturbed soil, near abandoned buildings and occupied homes as well, burdock sends down its taproot readily; displaying a preference for part sun to full . . . but it’s not a stickler even though it’s sticky.

Burdock grows tall stalks in its second year.  These rise from large wavy, lobed leaves, fed by deep nutrient pulling taproots which are established in the first year of plant life.  The leaves are grayish-greenish with a slight white fuzz to them, as though someone pulled away webbing and left bits behind.  They appear visibly dry, as opposed to succulent and juicy in the way of chickweed, and get smaller as they climb the stalks, which are where the flower heads appear from late summer through autumn.

The flower heads are more of a prickly ball of purplish pink than blossom, covered in needle thin prickles, slivers really, by means of which they hook, claw, and latch on to anyone passing: hair, clothes, fur, arms, and legs, they’re not picky.  Once latched on, they clutch in a tight grip, in the case of hair one may well wind up with matted clumps, those dread locks within which the bur lays hidden and often must be cut out: beware, beware, be aware of the bur!  They do this sort of thing more often in late autumn through winter, hitchhiking to unexplored places to sow their seed, grow, and fruit.

Arcticum could be from the Greek, arktos, or bear, and lappa from a word meaning ‘to seize’; seize the day and make bear medicine.

Bur from the French, bourre, or Latin, burra, meaning a lock of wool, likely a reference to sheep’s wool being seized by burs in the field as they brush by the Burdock.

Burdock began to be used as a blood purifier in the twentieth century, before that it appeared as a diuretic as early as the eighteenth century.

A cooling alterative and tonic diuretic, burdock leaves are bitter, drying (they promote urination and release of bodily fluids), stomachic, and rich in minerals such as iron. They are cold and dry in the first degree.

The roots promote kidney function, elimination of unwanted acids, and blood filtration.  They also stimulate digestion and improve lymphatic activity.  The seeds act quicker than the roots, which are a slow, well grounded, long release food and medicine that soothe the kidneys.

Burdock is nourishing to tissues, cleansing them as well as blood, kidneys, and bladder.

As it stimulates the movement of fluids, it is useful where there is water retention with dry tissues and water is stuck, its movement blocked, causing inflammation and irritation.  Burdock restores these channels and lubricates dry conditions, facilitating flow; a movement medicine.

The oiliness in the roots comes from volatile oils and inulin, which open the sweat glands providing a way out by means of the skin for toxins and heat to get moving.

The leaves strengthen and tone the stomach and are useful for indigestion as they get digestive juices in motion.

Burdock is useful in cases of jaundice, sciatica, gout, arthritis, and rheumatism.  It stimulates metabolism through the liver, cleanses, and feeds through the lymph, and removes waste; an elimination medicine that gets things moving.

The roots act on chronic conditions effectively, whereas the seeds have a faster action and are preferred for acute conditions.

According to Culpeper, “Venus challenges this herb for her own, and by its leaf or seed you may draw the womb which way you please, either upwards by applying it to the crown of the head, in case it falls out; or downwards in fits of the mother, by applying it to the soles of the feet; or if you would stay it in its place, apply it to the navel, and that is one good way to stay the child in it.”

The fresh leaves are an effective poultice for inflammation, burns, bruises, and swellings.

The roots have a sweetish earthy flavor and are quite tasty in soups or stir fries with onion, garlic, sesame, and tamari.

The stalks are also edible, I have not tried them so cannot say how they taste, but have heard that they can be chopped up and cooked as well.

Seeds, gathered at the end of the second year, decocted, tinctured, or infused.

Roots, lifted in the autumn of its first year, dried for cold infusion or tinctured.